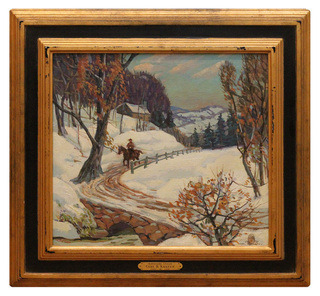 This work was featured in our 2nd Annual Curated Sale of Historic Indiana Art, April 8th, 2018 at the Indianapolis Art Center.

This painting was featured in our weekly email on 10/31/13 along with the following gallery comments:
Carl Krafft spent most of his career in Oak Park, IL and tends to be considered a ‘Chicago artist’. But in fact, he travelled frequently for fertile painting grounds. His earlier works focused on the Ozarks and indeed, some Brown County, IN subject matter. Later works such as this week’s Roadside Cabin incorporated more figures, structures and often a tableau in which many things were going on at once on a given canvas. Roadside Cabin is a charming example of Krafft’s later output — a horse and rider approaching a stone bridge in winter with a homestead in the background. Very evocative of man’s working relationship with pastoral beauty. A subject that was endlessly fascinating to Carl Krafft.