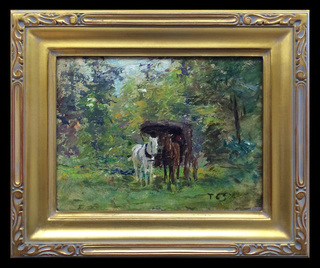 Landscape Study with Horses and Carriage

Flawless condition, stable and with no in-painting. Recently cleaned and re-varnished. Housed in a hand-leafed, period reproduction frame.
SOLD

This painting was featured in our weekly email on 2/19/2016 with the following gallery comments:

T. C. Steele is the first name in historic Indiana art. Born in tiny Gosport, Indiana and raised in equally tiny Waveland, Indiana he showed an interest and aptitude in art at an early age. After local study he spent his early career in Indiana and Battle Creek, MI as a portraitist. He moved his family back to Indiana, to Indianapolis, in 1877 and the quality of his work caught the attention of Herman Lieber who helped arrange study at the Royal Academy in Munich. He ultimately returned from Germany in 1885, again locating in Indianapolis. His studies abroad and his natural ability synthesized into what would become his legendary talent for Impressionistic landscapes. While based in Indianapolis, he painted throughout the state (and even making two trips West). He eventually lit upon Brown County around 1900 and after several trips to those hills, about 40 miles south of Indianapolis, moved there permanently in 1907.

Today’s offering Landscape Study with Horses and Carriage is likely from his Brown County period. It’s unusual for its small size. Steele oils (which were essentially his only medium) tend to be large and finished works. Steele was a successful artist in his day and didn’t have to bother producing small, affordable paintings. And he didn’t. Rather than produced as a work to sell, this is a study or sketch (as noted on the piece, verso). And yes, he signed it. Maybe it was an impulsive act or given as a memento. They don’t talk so one can only ponder.

The old note on the back is tantalizing but tells us nothing definitive. It doesn’t appear to be in Steele’s hand — why would Steele note ‘1910 (?)’. Finally, the signature is somewhat faint, trailing off into nothing. In casual conversation, it’s been speculated that the signature could be that of Selma Steele (his second wife) who was thought to have signed some canvases following his death. But there’s no estate stamp which is a ubiquitous presence on Steele paintings which come from the estate. Nothing on the panel phosphors under black light. Given this (particularly in relation to the signature), one would conclude is wasn’t signed posthumously and was in fact, by his hand.

The painting has been in the same Indiana family for three generations and comes now, fresh to market. It is in perfect condition and recently went through basic cleaning and re-varnishing. It’s housed in a hand-leafed period reproduction frame and ready to hang. A delightful and unique piece by the most important painter in Indiana history.