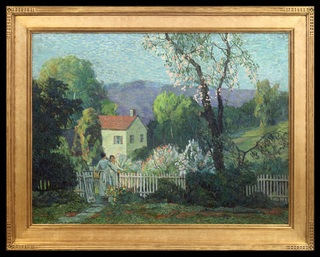 At the Garden Gate

Oil on Canvas
30 x 40 inches
Signed lower left
SOLD
—
This painting was featured in our weekly email on 10/21/16 along with the following gallery comments:

Carl Krafft was born in Reading, OH and moved around with his family during his childhood, ultimately settling on the south side of Chicago. He studied art at the Chicago Art Institute and after a few years living in Chicago, moved to Oak Park, IL (about ten miles west of Chicago) where he remained the rest of his life. He’s often associated with the New Hope, PA school of artists – particular Daniel Garber — whose works influenced Krafft. Though he did not spend much time in New Hope and most of his settings are Midwestern. He began painting in the Ozarks in the 1910s and was also a frequent visitor to Brown County along with other colleagues from Chicago’s Palette and Chisel club. Krafft participated in exhibitions and had gallery representation all over the eastern half of the United States and his work resides in the permanent collections of over 20 different museums. He has auction records up to $85,000 and it is for the type of work we are presenting today. At the Garden Gate (our title) is an exhibition size oil presenting a timeless tableau – two women talking at the garden gate. Without being overly romanticized, Krafft presents this simple expression of humanity. And it is these tableaus, typically featuring figures engaged yet natural with their surroundings, which characterize Krafft’s most powerful work. This painting ties to another published Krafft painting, Open Gate (1920) which is the same setting and features the same basic elements in today’s painting, minus the figures. It’s a stunning piece – very colorful and beautifully rendered. The painting is in flawless condition. It was recently cleaned and re-varnished and it’s housed in the original hand-carved frame. Good stuff!
SOLD