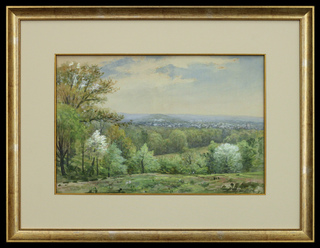 This work was featured in our 2nd Annual Curated Sale of Historic Indiana Art, April 8th, 2018 at the Indianapolis Art Center.

-
This painting was featured in our weekly email on 6/16/17 along with the following gallery comments:

R. B. Gruelle was largely a self-trained artist and spent his early career in Illinois doing the portraiture circuit. He moved with his family to Indianapolis in 1882 and, upon their return from Europe, took up association with T.C. Steel, William Forsyth, Otto Stark, J. Ottis Adams and other local artists. Gruelle’s career took a leap forward when he was included in the Five Hoosier Painters show which was exhibited in Chicago in 1894. Those ‘Five Hoosier Painters’ then became known as The Hoosier Group and it’s an esteemed coterie of Indiana artists. Today’s painting, Spring Landscape (our fancy title) was executed while he was still living in Indianapolis. Throughout the decade of the 1890s, Gruelle was often traveling to the East Coast. So the conundrum here (as the painting ain’t talkin’): what is that town featured in the background? It could conceivably be Indianapolis from Crown Hill but none of the obvious landmarks (esp. the State Capitol Building) are present. So it’s a mystery, at the time of this writing, what the setting is. That said, a very nice example with the dogwood in bloom and highlighting Gruelle’s gouache work.
SOLD